When to Cheer & When Not Too

Do you know when it’s appropriate to cheer and when it isn’t? 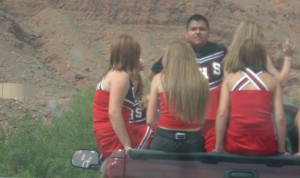 One of the main responsibilities of a Cheerleader is to promote school spirit and good sportsmanship. Your goal should be to involve the fans with your enthusiasm and zeal, but it is also important to know when it’s appropriate to cheer and when it’s not.

As a Cheerleader, you should be a role model that leads the crowd in a positive way, shows respect for the other team’s players and fans, and that always displays proper etiquette.

• When time-outs are called, during half-times, quarters, or periods.

• When your team has made an exceptional play or drive.

• When a player is leaving or coming into the game.

• When an injured player gets up.

• When your team is on offense or defense, do an appropriate cheer.

• When the game is close.

• When your team scores.

When Not to Cheer

• When a player is injured.

• When your team commits a foul against the other team.

• When either team is in huddle.

•When a team makes a mistake or is penalized.

• When the opposing team’s band is playing.

• When signals are being called.

• When you hear negative or insulting chants from the crowd or fans.

•While the other squad is cheering.

Other Points to Remember

• Don’t block the view of the spectators with stunts during the game. Save them for time-outs, quarters, or half-times.

• Do not put up a stunt behind a basketball goal during a free throw.

• Make sure you know when your team is on offense or defense.

• It is a nice gesture to welcome the opposing team.

• Show tact if your team is ahead and act gracefully if they are behind.

Cheerleading should be a positive experience, so set a good example. Always act with integrity, fairness and the leadership qualities that Cheerleaders are known for.

When to Cheer and When Not to… Let’s see how much you know about when to cheer.

1. The announcer is introducing the opposing team, what do you do?

Boo and hiss.
Clap.
Turn your back to them.
Run out to greet them.

n2. Your team has the ball, what kind of cheer would you use?

3. A player has been injured, when would you cheer?

As soon as it happens.
Wouldn’t cheer.
When they get up and you know they are all right.
When the paramedics run out on the field.

4. The officials have made what you think is a bad call against your team, what would you do?

Throw stuff on the court or field.
Accept it gracefully.
Run out there and argue with them.
Shout insults to them.

Remember, what you do and say is a reflection on your school. You are some of the first people that many people will see when they visit a school. You represent everyone. Your job is one of PR and spirit.

Posted in Leadership | Comments Off on When to Cheer & When Not Too
Tags: Cheer

Studio dancing takes on a whole different level when it comes to training. It’s much different than drill team. From the largest studios all the way down to the smallest. It’s in these studio halls where you learn to explore and express your inner being as a dancer. You get the basic’s of technique in a studio.

Here you can be part of a team or a soloist if you so choose. You can even become a dance champion!

Being a soloist is by far the best experience that any young dancer can ever experience. It’s personal when you solo. It is here that you learn to challenge yourself, and make those changes and take those steps that are memorable to you. It also adds dimension to your team dancing.

The Stars National Dance Program (#1 junior dance program in America) http://starsdance.com/stars/Home.html is credited with giving 1000’s of dancers their shot at becoming a dance champion. Stars, now in 7 states, with over 21 studios, have brought dance into the homes of dancers all over the western United States.

Stars believe in the whole dancer. The concept of building strong self-esteem through dance is one of their motto’s. Their studios provide structure and guidance in dance education to all their students – structure being the key.

The technical foundations of dance, are taught at a very early age and reinforced all the way though elementary, junior, and senior high levels. Students have a chance to shine at both regional and national competitions as well. They get to show off their abilities – and they do!

Stars is also credited with bringing in some wonderful talent from today’s professionals like Dennis Caspary http://2daysinoc.com/ , who recently did a master jazz class for Stars this past March.

Stars packed the deck with a lot of talent to train us “would be” dance champions.  Stars was, and still is, a great thing to be a part of. Stars National Dance Program is a family of dancers working together to provide the best dance education possible.

Founder, Pat Rhodes, started Stars in 1970. Now under the direction of Holly and Kevin Diaz, the Stars National Dance Program continues to prosper and grow. The program is packed solid with excellent administrative staff, and 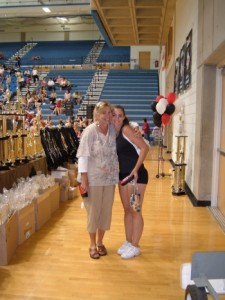 wonderful teachers and directors.  If you are interested in the STARS training programs, please contact them at the addresses listed below:

I was blessed with great fortune to have met some wonderful people growing up in STARS. I became a Star in 1995, and stayed with them all the way through high school as a student & later staff instructor – I enjoyed every minute.

At a staff training with Stars, I gotta say “we rocked”. Haha… literally we rocked – as we competed for a set of Capezio dance shoes in a rock wall climbing contest. “I won!” “I still have those shoes!” “LOL”…..

Love you Stars!  Always a family of Stars!

When first we met I was so young, barely able to walk or run. I reached and reached, and finally I grew, and when my fingers touched that’s when I knew.

You were my first friend. You held me up when I could not turn. You gave me strength, and with strength courage grew. Soon I was able to go up on those toes, and then a turn, and then two.

The years have past, but you’ve been there for me always alas. Now my fingers they reach down, they gently touch the old wood of time. I embrace its feel and turn to look at the face in the mirror I see – It’s me all grown up.

My old friend look at me, for it is because of you I stand today. With pose, with grace, with honor in this place.

My friend whom I’ve never thanked until today. Just a solid piece of wood mounted on the wall made of clay. Humbly I say that your friendship has helped lead the way – from childhood to graduation day.

My prayers I lift up and say, that someday my own children will find this way. That they too may so ever sweetly reach up and touch, this same friendship – a bond between two. That you dear old friend will guide their way, as you have guided mine all these days. 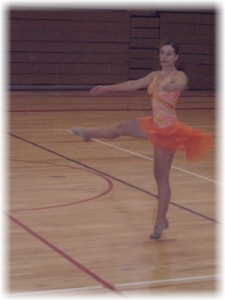 Port de bras[“carriage of the arms”]:

1. How a dancer uses his arms.

3. Sometimes used instead of cambré. A grand port de bras is a circular bend, either toward the barre, then down, then up away from the barre, and then backward and back toward the barre: or the same thing in the opposite direction.

Posted in Leadership | Comments Off on Ballet Barr – Merry Christmas Everyone!
Tags: memories