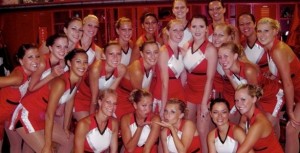 What’s it really like to dance with a professional university team? Exciting! It’s an adventure that is worth taking. I’m glad I did. The friendships I made will last a life time. We were a REAL team. We practically lived together 24/7! Two weeks into the new school year, everyone on campus knew who you were. It’s just the way it was.

I consider myself fortunate to have been a member of the University of Utah Crimsonline Dance Team. My coach was Lori Rupp. Lori was not only the coach of the Crimsonline, but the events coordinator for Utah State Drill. The State Drill Competition was and is still one of our major fundraises that the Crimsonline does each year. Learning how everything came together for an event of this scale was a fascinating experience for me. We started at the crack of dawn and didn’t finish each night until everything was accomplished.

Coming from a little poe-dunk town in the southern end of the state, Moab Utah – I still managed to become a competitive dancer, competing every year since the age of 5.  I  studio trained from age 5 all throughout my high school years, then into college.

It is really important to do studio dance while you are in high school. If you don’t – you may run into problems trying out for a college or university teams. You will work hard!

I’ve seen a lot of dancers who think they can get away with talking and goofing off during a practice – not at this level. You are expected to perform at 100% at every practice – and you WILL perform at 100%. I was in good shape already, having ran track back home. I was also solo training in dance  before coming to Salt Lake City to try out.

Drill can make you lazy. It isn’t hard enough, if at all. You really need studio
training to make it on to a decent college or university  team.   Do it!

The first day of camp, I  thought I had died and ended up in dance boot camp hell. Lori worked us so hard – and LONG…  BUT —- We loved her!  She trained her team “the right way”.  She understood that technique and  synchronization aren’t something you learn in a text book, but rather through years and years of practice.

She taught all of us that we were a team.  We weren’t there just for a social thing – we were a sisterhood. Things mattered.

The Crimsonline did many different types and styles of dance. We danced jazz, lyrical, hip hop, novelty – all the standard stuff. We also held pom pom’s and cheered with the cheer team.

We were part of the spirit squad. The cheer team and the dance team were both Lori’s teams. Everyone was part of that spirit squad. That is how it should be. There is Spirit in Unity. You have to bring it all together to get it to work.

A major part of the Crimsonline is also working with the Pep Band. The U of U Pep Band is one of the best in the nation. They attended the ceremony in Washington DC at the invitation of the 44th President.  Doesn’t matter if you are democrat or republican, for your school to receive an invitation of this magnitude is an honor.

As part of the your Pep Band duties,  you learn many flag and prop routines that accent the marching band theme. You will spend many hours getting your lines straight, kicks on time, flags all turning the same way.  Be prepared to  show up about two week before classes even begin for the camps.  It’s long- so bring lots of water!!!

The members of the pep band are hilarious. They make the pain in all your limbs not hurt so bad with their great humor.  :-0)

As a member of a University Dance team you will probably travel to out of state games with the team. I’ve been to San Diego, Las Vegas, etc. Most recently the dance team traveled with the Utes Football team to Louisiana for the BCS games. The Utes won. (The Utes are now part of the PAC-10)  Go Utes~

There are a host of fundraisers that you will do on a University dance team, visiting hospitals, or doing an alumni fundraiser, etc. You will  be involved in  all the special events and games. Performing is a weekly event! Practice is a daily event. Practices are hard, you will work out and you will be solid.

The girls on the team respected Lori. She was “a real professional coach”. We performed for her. That is the way it should be. You represent your school, you should look and perform as professional as you can.

I did enroll in modern dance classes while I was at the U.  But mostly, I kept up my studio dancing and honed in on my choreography skills.

To be an alumni you have to finish the year out. You can’t drop mid-way or near the end, or you are taken off the roles. I made the team each time I tried out.  I’m an alumni of the University of Utah Crimsonline Dance Team. That is an honor.

I was exicted when Lori called me and asked me to judge at the state level. It is nice to be recognized for ones ability. I am currently a member of the Utah Dance Judge Association (UDJA), and I am looking forward to renewing that again this year – for my third year.  As well I’m looking into  joining a couple other professional dance/judging associations.  There is a lot to learn out there beyond poe-dunk.  The ladies and gentlemen at the state level that I have met – are great mentors.

It is exciting to dance on a team, and be able to tell about it, and all the wonderful experiences that go along with it.