Where do you draw the line with choreography? 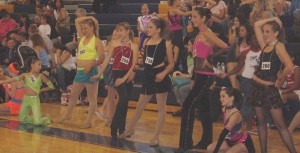 Everyone uses the internet now days to capture movements and styles.  Everyone goes to conventions and trainings to learn new and creative forms of dance too. They want to capture it from the pro’s.

Using eight to sixteen counts of a combination that is bold, new and exciting is pretty much the norm.  That is the trend.  Keeping a new dance style moving through all levels. But, if you think about it, how many hours did that choreographer spend creating those moves?

You should always use professional  ethics when using another persons material.

Many schools and  dance programs go to dance or drill camp, and are taught a team dance.  It is common place to return to your home turf and perform that routine for your home crowd.  It is understood that you won’t be attempting to sell it as your own.    Teams routinely buy choreography from companies who specialize in the business.

It is almost impossible to create a dance now days and put it on line at places like Youtube, and not get notified of  usage right claims for music, and a advertisement placed over your work.  But, at least many artists allow the videos to stay.    KUDO’s for that.  It’s hard to be creative without music.

You should be careful when buying choreography.   Don’t let anyone sell you a bill of goods belonging to someone else.  There motives are clear; money and deceit.

You should also draw the line with any instructor that isn’t first teaching your child the technique they will need to perform adequately before a judge.   Listen to those who have been in the competition world, some of them all their lives.

A while back I was asked to do a choreography piece for a young dancer.   I had a number of ideas I was working on that would fit this particular dancer.  But, there were a number of technical issues that they would have to overcome first , but I still felt  they could probably learn the routine.

The young  dancer  wanted to show me a  piece they had learned from another instructor, and I watched as they performed it.  To my dismay it was nearly step-for-step a routine I had seen someone else perform online.   It was all there, down to the push/pulls,  and turns.   I told them  it was cute, and then we continued to work on technique for the dance we would create and learn together.

Another person, who had accompanied me to this practice,  later asked me how open the parent would be to knowing the truth – win or lose.  Good question.

I did learn that the dancer was taught the routine in about a day and a half.

Honestly, I was  concerned about the technical flaws I was seeing in this young student.  The student also missed a number of practices, and with each missed practice they were regressing.  It was like having to start over each time.  The other instructor wasn’t dealing with the technical issues, and it was problematic.   Having been a judge, I was afraid those little flaws could be costly for the young dancer.

The other instructor also placed the dancer in a category not suited for the routine, and ended up with penalty marks, because she had failed to  check the rule sheets before teaching the dance.  Someone else’s dance!

This instructor had no idea what “was” and “was not” acceptable at  competition.  They ended up having to change the dance, and category.  It was unfortunate for this young dancer to have to suffer this type of neglect.

Here is the facts.

ALL technical training should be a  part of the dance.   But how do you  explain that to a parent  who has just been ripped off by another instructor?

You have to draw the line somewhere.  You have to decide if instant gratification, or life long technical learning is best for your dancer.

I do hope the parent will also notice the level of regression, and seek something better for their  dancer.

Don’t let pride get in the way.

Posted in business | Comments Off on Where do you draw the line with choreography?
Tags: choreography appropriate

« Working with what you have “Bring it”!
Pep Clubs »